While Head Football Coach Miguel Regalado hopes to take his team to their first post-season appearance this year, his plans for the team go beyond fall. Each spring, he and his assistant coaches’ minds turn to the draft. Not the NFL Draft, but a friendly competition between members of the Clarke Football team.

Over the course of the spring semester, members of the Clarke Pride football program are divided into four groups and compete across categories like GPA, weight room performance, and community service hours. As the “Commissioner,” Miguel determines what actions earn or subtract points from a team.

“For example, if I get a web concern that a student missed class, he’ll lose points for his team,” Miguel said. “It gives us some opportunities for individual coaching that speaks not just to a student’s performance on the field, but his performance at Clarke.”

The winning team is announced at the beginning of summer training camp and is rewarded with a special meal, Clarke gear, and permission to skip the dreaded running test. All great incentives, says Miguel, but the true benefits run deeper.

“The competition is a way to reinforce that this is not about one guy — you are part of a team and your actions impact others,” Miguel said. “Our guys are so busy with their academics and their sport, yet they still find time to be involved. I don’t think the average person realizes how tough it is to be a student athlete. It’s difficult, but they are well prepared for their future.”

Ricci Giambruno ’25, a double major in philosophy and business administration and a center for the Clarke Pride, has taken Miguel’s words to heart during his time with the team.

I think that very few programs put as much effort into aligning the views and mission of the team with the mission of the institution. Coach Regalado has seemingly been able to incorporate the competitive nature a football team ought to have with Clarke’s mission and values, and that expectation of volunteerism differentiates Clarke Football from our competition. Things like our spring competition allow us to not only bond as a team but also get out into the community and make a difference. Furthermore, it requires the team to be selfless, which I believe is an important characteristic for both football and being a contributing member of society.

Beyond joining the Future Young Professionals and the Clarke Scholars program, Ricci accumulated over 50 community service hours during 2022. He volunteered with the Boys and Girls Club of Greater Dubuque, Four Mounds, Habitat for Humanity, and the Dubuque Regional Humane Society. He also ran a study table in the Margaret Mann Academic Resource Center to help his classmates with their studies.

“I tend to answer questions students have regarding finance, economics, and philosophy. I also will proofread papers from time to time,” Ricci said. “However, I think the best help I can offer is not subject specific, but rather student based. I have a decent amount of knowledge regarding specific subjects, but I believe understanding time management, study strategies, and effective communication are far more important than understanding Immanuel Kant or knowing how to find a p value. Not that those are not important, but someone shown the right tools can succeed in any subject.”

Incorporating community service into the team culture has not only had a positive impact on Ricci and his teammates, but throughout campus and greater Dubuque. In the 2021-2022 school year, members of the Clarke Pride football team volunteered with 16 different campus and community organizations and logged hundreds of hours helping their friends and neighbors.

“Our guys were preparing and delivering meals around the city with the Urban Bicycle Food Mission. With Habitat for Humanity, they moved a lot of equipment and did hard, heavy work. They unloaded four semi trailers in a week. The one I’m most proud of though, is our mentoring program,” Miguel said. “We have guys that went to Fulton and Roosevelt Elementary Schools and worked with students. They were trained by the Dubuque Community School District, and I know that personal interaction makes a difference for elementary students and Clarke students alike. We are excited to continue that partnership with other area schools this year.”

While the Pride looks to find new levels of success on the football field this season, Miguel and his staff remain incredibly proud of the work that happens off the turf. It’s a lesson he has instilled in his players for five years and intends to keep at the heart of the program for years to come.

“Football is important, but it’s not number one. It’s about a student getting their degree and them becoming a better person for being a part of your program. To me, that means helping out at Clarke and in the Dubuque community and teaching the students life lessons,” said Miguel. “It’s work that I’m honored to be a part of.”

To learn more about how all our student-athletes perform on and off the field, visit clarkepride.com. 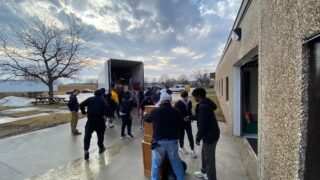